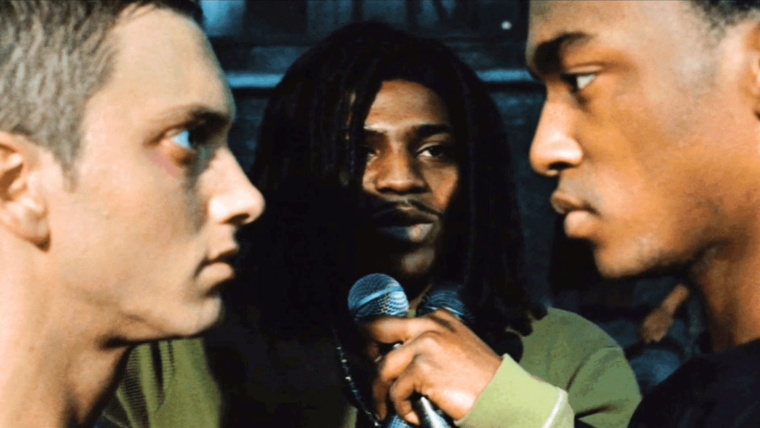 8 Mile Papa Doc is one the most memorable characters from the 2002 hood classic featuring rapper Eminem. Also, 8 Mile the movie is inarguably the most impressive movie on rap ever released. It is a story of struggle and the yearning for something big. A young rapper is bound by his circumstances but dreams of becoming a renowned rapper. However, his friends and foes alike muddle his journey. His greatest foe is the character we will discuss here, Papa Doc.

In 1995, Jimmy “B-Rabbit” (Eminem), a 23-year-old rapper is living in Detroit, Michigan. He is a blue-collar worker tired of his circumstances and wants to make it big with rap. He resides with his alcoholic mother, Stephanie (Kim Basinger), his younger sister Lily (Chloe Greenfield), and his mother’s abusive boyfriend, Greg (Michael Shannon).

Jimmy’s focus is rap, but he chokes during a rap battle, which disheartens him and he leaves the stage being booed and humiliated. He had already parted ways with his girlfriend, Janeane (Taryn Manning).

His gay friend is insulted in the factory by a rapper, and Jimmy raps to defend him. Alex (Brittany Murphy) likes his behavior and falls in love with Jimmy, who likes her too.

Wink arranges for Jimmy to meet recording studio producers, but when Jimmy arrives at the studio, he finds Wink and Alex are having sex. He is enraged and starts an altercation with Wink.

Wink and rappers from a group named Leaders of the Free World beat him up when he gets out. Their leader, Papa Doc, threatens to kill Jimmy by putting a gun on his head. However, Wink calms down the situation.

Future (Mekhi Phifer) is Jimmy’s best friend and encourages the latter to engage in a rap battle with Leaders of the Free World to exact revenge. Jimmy agrees to this and sees it as an opportunity to take revenge.

However, his boss has offers him extra shifts by noticing his improved work ethic and discipline. His night-shift coincides with the rap battle at the Shelter (where Future, his friend, hosts rap battles). He asks his coworker Paul to cover his work until he comes back.

Jimmy has to go through 3 rap battles against 3 members of Leaders of the Free World to win the night. He takes the first two rounds against Lyckety-Splyt & Lotto. He is pitted against the most feared rapper of the battle, Papa Doc, the leader of his group.

However, Jimmy has a master plan up his sleeve. He exposes Papa Doc’s privileged background while acknowledging his rugged upbringing. It is an unexpected salvo for Papa Doc, who has nothing to offer in rebuttal. He gives up the battle and returns his mic to Future. Jimmy wins the battle and goes straight back to his workplace.

The plot of 8 Mile reveals the real nature of the movie’s main antagonist, Papa Doc. He is not a smiling, gentle leader of a rap group. He is a violent person with a history of troublesome and aggressive behavior.

Papa Doc’s arrogance is on full display when he heckles and confronts B-Rabbit’s crew and other people after winning the rap battle against “Shorty Mike.” He believes nobody can touch him.

When Jimmy roughs up with Wink, we are shown a glimpse of Papa Doc’s hot-headedness when he pulls a gun to kill Jimmy, but Wink dissuades him from pulling the trigger.

The plot of the movie lays the deceit of Papa Doc bare. Thanks to Jimmy’s epic performance in the final rap battle against Papa Doc, it becomes obvious that the latter is an impostor.

Papa Doc comes from a privileged background but poses as a thug. He poses strong but is mentally weak and cannot stand up to scrutiny. The whole foundation of his tough persona comes crumbling down when Jimmy exposes him.

Nobody knows about this, and even if someone does, they stay silent because of the power Papa Doc wields. However, Jimmy breaks the spell of terror triumphantly by divulging his secrets in front of everyone and telling everyone he is a wannabe.